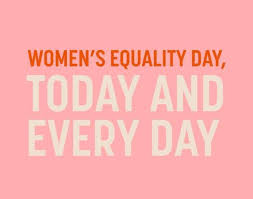 Let’s have a small history lesson….The 19th Amendment gave women the right to vote nationally on August 18, 1920, so why is Women’s Equality Day on August 26th each year? The simple answer is that even when a constitutional amendment has been ratified it’s not official until it has been certified by the correct government official. In 1920, that official was U.S. Secretary of State Bainbridge Colby. On August 26, 1920, Colby signed a proclamation ending a struggle for the vote that started a century earlier. Women’s Equality Day commemorates the passage of the 19th Amendment to the U.S. Constitution, granting the right to vote to women. The amendment was first introduced in 1878. In 1971, the U.S. Congress designated August 26 as Women’s Equality Day.

Women’s Equality Day not only commemorates the passage of the 19th Amendment, but also calls attention to women’s continuing efforts toward full equality. Activists such as Susan B. Anthony, Elizabeth Cady Stanton, and Alice Paul were leaders in the women’s rights movement. Their focus was to ensure that women were given a fair and equal right to vote. These women have inspired me to carry their message in my current role as women’s health nurse practitioner and nursing entrepreneur.

I find it very fitting to open my own practice on August 26, 2020, 100 years after the 19th amendment was past. The SHOW Center is a different approach to care, it starts where the 19th amendment left off, not just granting access to some women but providing access for all womxn. It is a practice created by a woman who offers a safe space for all to provide evidence-based and integrative healthcare customized for peoples mental, emotional and physical well-being in the area of sexual health and dysfunction.

While we have made a lot of progress for women’s equality, women are still underrepresented in business and leadership positions and healthcare.  We are especially underrepresented in terms of our sexual health. The legacy of care has left a lot to be desire and while there are many big shoes to fill and many big needs to meet it would be foolish to doubt that the right woman, with the right mindset, can make the right impact. Let The SHOW Center be a place that sets a new legacy in womxn’s sexual health…remembering all who got us here and caring for all that will move us forward.